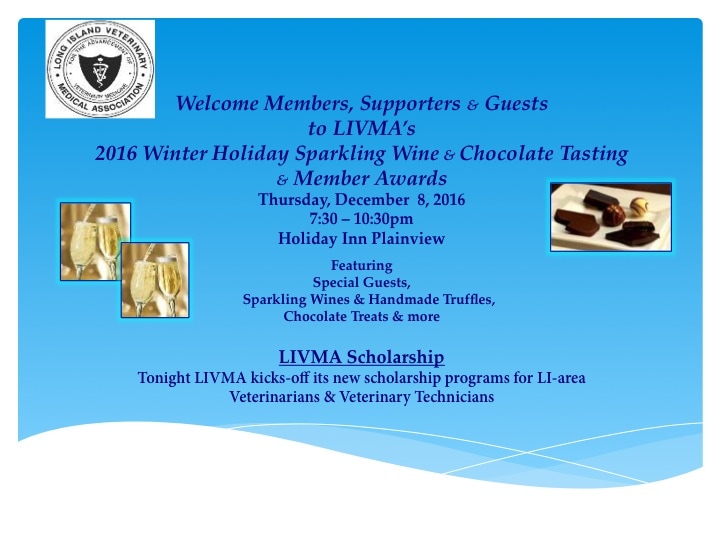 LIVMA Member Archives featured in video below. Click to watch.
The following photos are from the sparkling wine and chocolate tasting that began the evening
LIVMA's Holiday Photo Booth 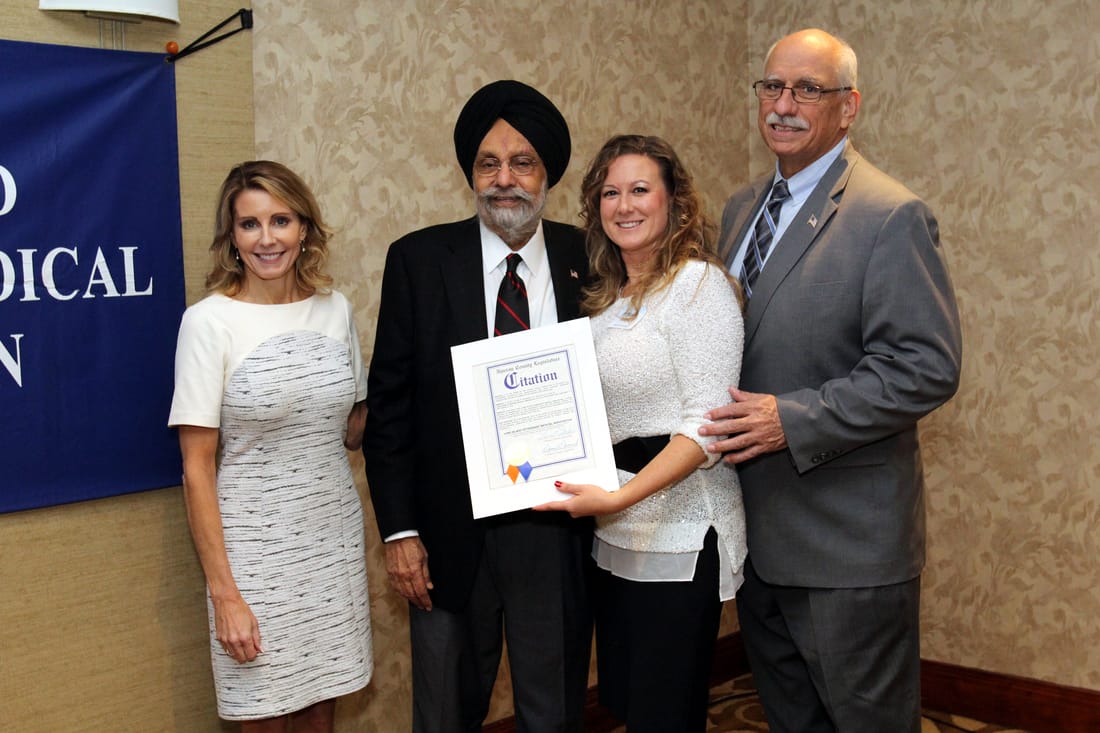 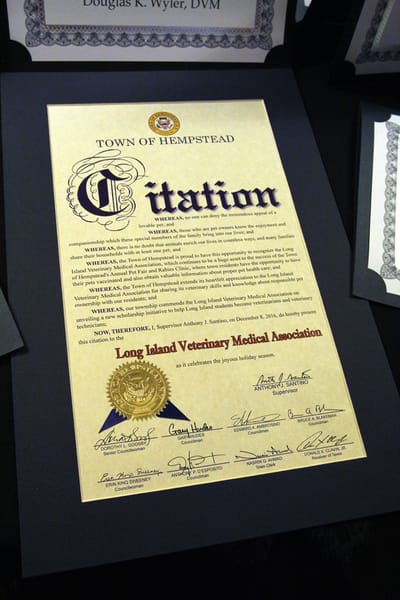 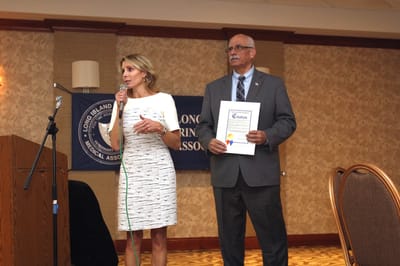 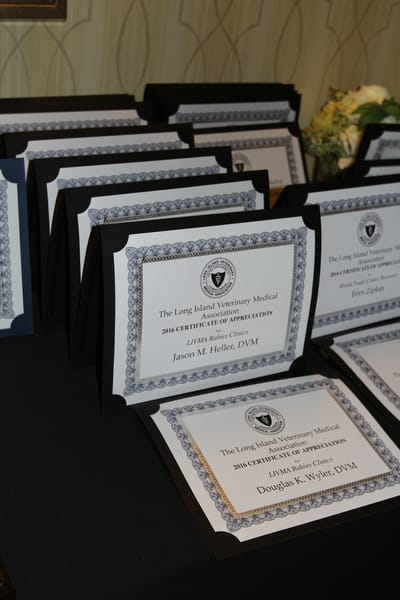 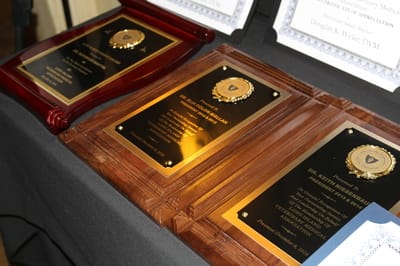 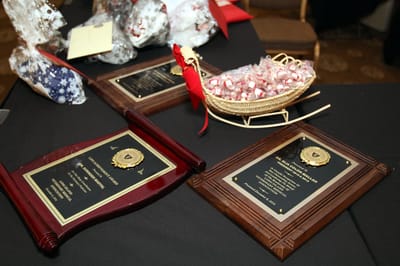 The following are excerpts from LIVMA President, Dr. Nicole Paccione-Gerbe's, presentations to the members 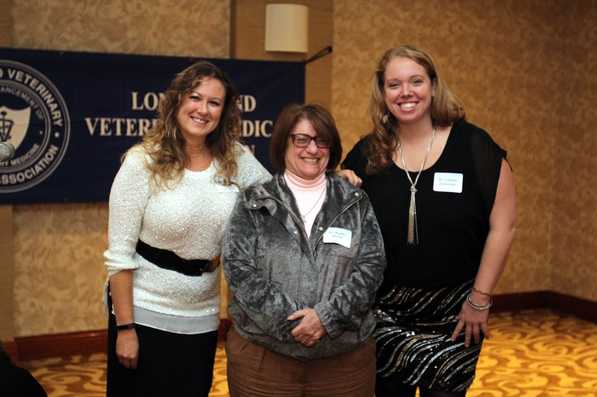 Installation of 2017 Officers
We’re going to start the evening by installing the new officers of the Board for 2017.

While not the 2017 Officers could be with us tonight, I would like begin by inviting Dr. Robin Sturtz up to join me.
Dr Sturtz  will be President-Elect and also serving as LIVMA’s New York State Delegate in 2017 – completing Dr. Surinder Wadyal’s term as he will be the New York State Veterinary Medical Association’s President-Elect in 2017.
Next I would like to invite Dr. Lauren Donovan to join us. She will be serving as Secretary for 2017.

Dr. Dennis Dougherty will continue to serve as the LIVMA Treasurer and Dr. Anthony Nanton as Ethics Chair for 2017.

And I am delighted to be returning for my second and final term as LIVMA President.

Thank you to each of these members for their time and service to the board. 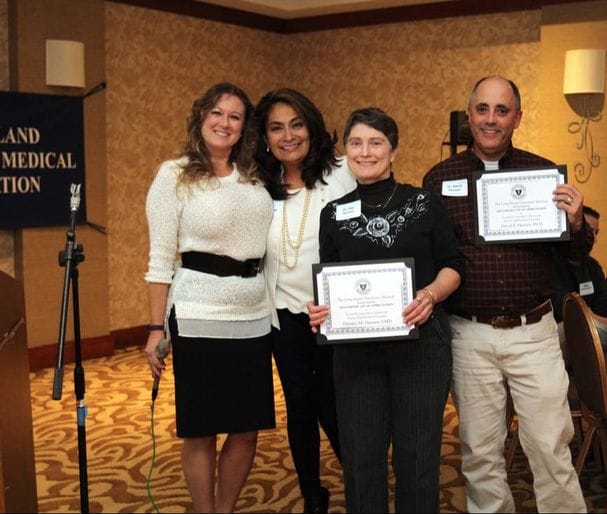 Career Exploration & Shadow Program
Deciding you want to want to become a veterinarian or technician might happen when you are 5 or 6 and stay with you forever, or might be something you come to a bit later – say in college.

Please join me at the podium Dr Dee Hensen, Dr. Dave Hensen and Dr. Elia Colon-Mallah as we recognize you for your service to this LIVMA program. In particular I would like to point out that Dr. Dee Hensen has helped to oversee the Career Exploration program for all 25 years. 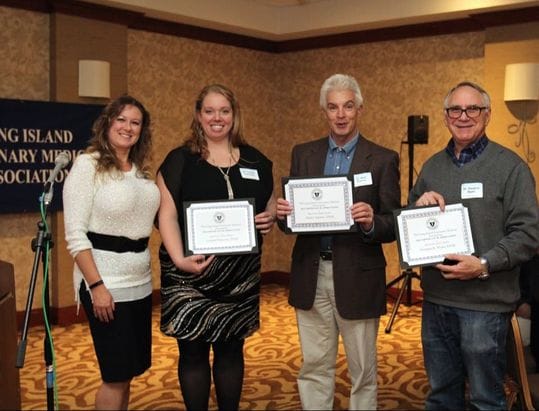 Hurricane Sandy Shelter
During times of disaster LIVMA’s members are called upon to offer service in many ways – some lend cages, some house and some work at the shelters set-up in places like Nassau County Community College. During Super Storm Sandy lost pets and pets who were in need of shelter were housed and cared for by LIVMA members. But Hurricane Sandy is only one example of the many times our members have offered service in times of disaster.

Please join me at the podium Dr Lauren Donovan, Dr. Neal Saslow and Dr. Douglas Wyler as we recognize you for your service to this LIVMA program. 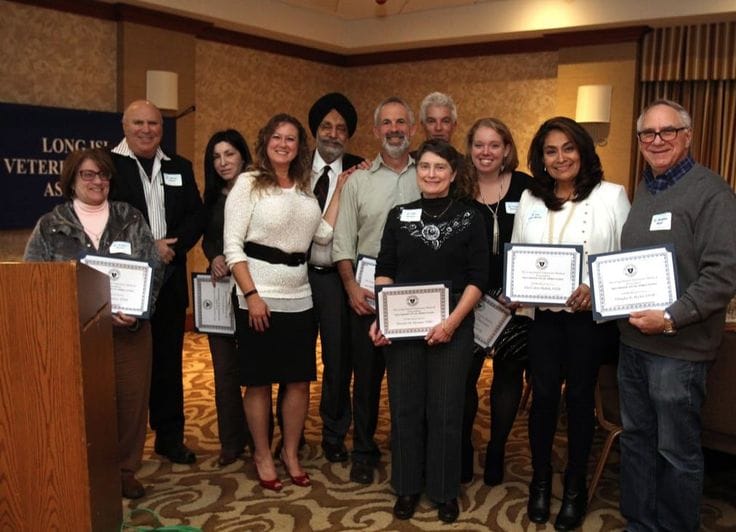 LIVMA Board or Committee Members
Serving on the Board of a non-profit organization requires commitment to the mission and goals of the group. Some of us actually volunteer – some get volunteered – ….

But for those who do serve there is great satisfaction in seeing new programs initiated – like our Open House Across Long Island program and the new Equine Community Education Outreach we are hosting. There are those who serve as committee members and those who serve as officers and all are appreciated and recognized by us tonight. 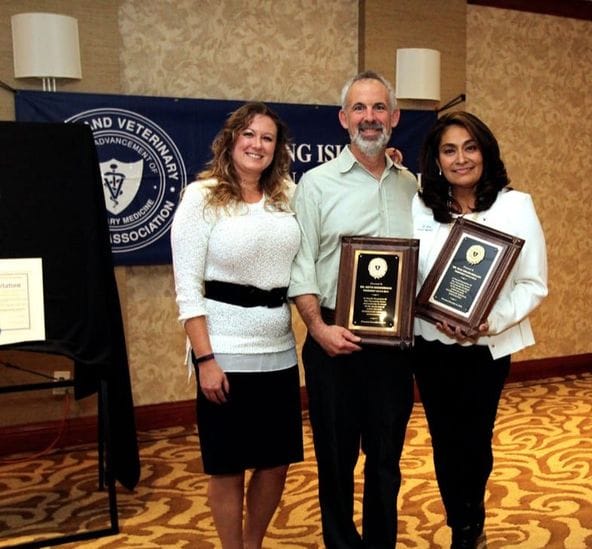 LIVMA Past President Awards
Serving on the Board is one job – being President is quite another.

Each of these doctors (Dr. Elia Colon-Mallh and Dr. Keith Niesenbaum) served LIVMA for two terms during significant times of change. As the New York State Veterinary Medical Society underwent growth, renewal and was re-organized under new leadership LIVMA needed to work alongside the state society to ensure our continued service to our members.

Dr. Elia Colon-Mallah served as LIVMA President for 2012 and 2013 and we thank her for her service.

Dr. Keith Niesenbaum began his term in 2014 and served through 2015 and we thank him for his service. 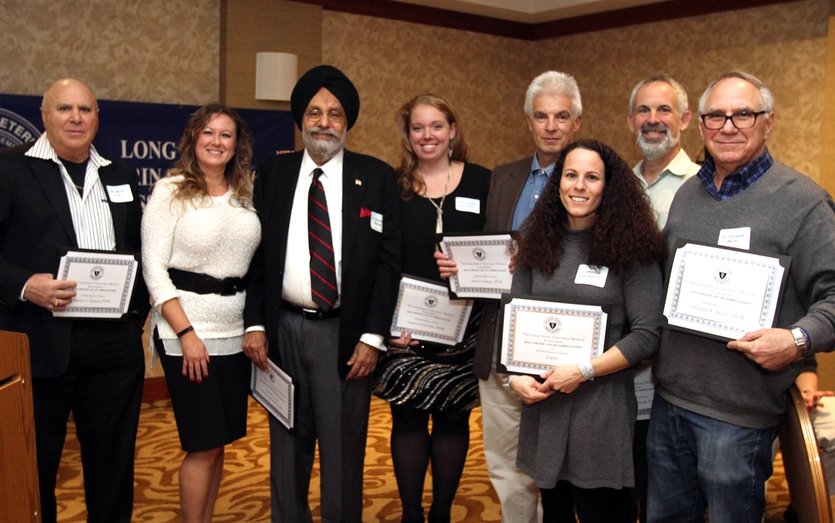 Rabies Clinic Town of Hempstead / Oyster Bay
Each Spring for more than 20 years the LIVMA has worked alongside the staff of the Towns of Oyster Bay and Hempstead to host annual low-cost rabies clinics. Funds raised from these programs have been reinvested by the LIVMA in an animal control van for the Town of Hempstead, which we helped them purchase in the late 90s, along with many community education and outreach programs.

Run annually for LIVMA by Dr. Surinder Wadyal for more years than he cares to remember, September and October often see LIVMA Board members, area technicians and others at the Towns of Hempstead and Oyster Bay Rabies clinics administering vaccinations. In good years we have seen as many as 800 pets vaccinated in a single day.

We also want to thank Zoetis, who this year donated all of the needed vaccines. In years past LIVMA has had to go to a number of the vaccine manufacturers for a few hundred here and there and everyone was very helpful, but it did make more paperwork for Dr. Wadyal. This year Jim Kuntz was able to arrange for all that was needed and what we did not use was left with the shelters to further assist in ensure community health standards are met. Catherine Lombardo of Zoetis, please come up as well.
LIVMA Regional CE Speaker
The LIVMA CE committee works annually to ensure our members get world-class programs monthly at our local CE programs. An LIVMA member could, if they choose, never leave Long Island for their CE as we offer over 20 hours annually and most of us only need about 15 a year to make the 45 for a 3-year license renewal cycle.

One way LIVMA is able to offer so many hours of quality CE is by working with our own Board Certified regional specialists to create lectures and programs for our evening and day-long programs. LIVMA’s “Celebrating Their Own” allows our members to be educated in all areas of medicine including Behavior, Ophthalmology, Internal Medicine, Oncology and so much more as I think every specialty is currently being practiced by one or more highly qualified members.

And we’d also like to thank Sue Fowler from Bayer who has been a continuous supporter of the LIVMA’s CE program for more than a decade. Sue will you come up…
World Trade Center 15th Remembrance
This year marked the 15th Anniversary of 9/11. Many of our members spent days and hours helping with the recovery efforts in the aftermath of the towers falling.

Caring for the dogs that searched the piles was a difficult job made all the harder by the devastation all around, and yet these men and women served their profession and our country during the days and weeks it took to sift through all the rubble. 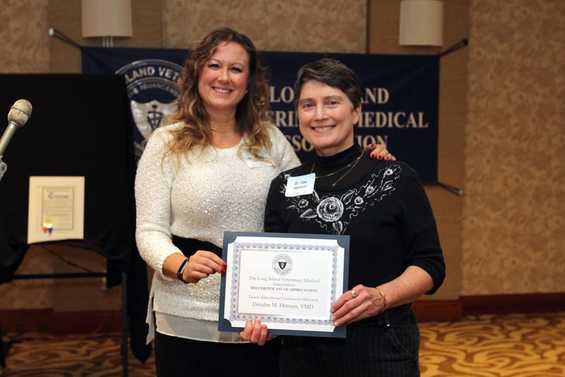 We’d like to thank Dr. Dee Hensen and invite her up for her service in planning the first, and I think she is already working on the second annual Equine Educational Community Outreach program for LIVMA. 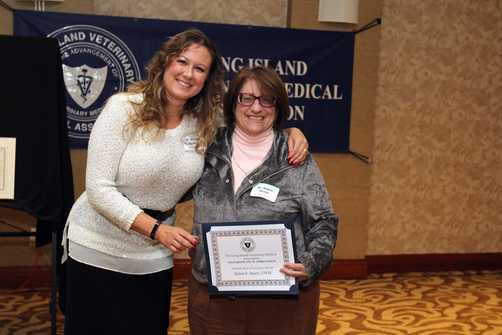 NYSVMS Hall of Veterinary Health
Along with community programs like Career Exploration and Equine Education the LIVMA has continued to participate in the Hall of Veterinary Health at the New York State Fair for more than 15 years. In the last few years that is thanks to Dr. Robin Sturtz who makes the long drive up to Albany and helps with the exhibits and displays.

We’d like to thank Dr. Sturtz and invite her up for her service to this program.

Lifetime Achievement Dr Surinder Wadyal
We want to say thank-you to Dr. Surinder Wadyal for his decades of service and his most recent achievement in being named President-Elect for New York State.

As Dr. William Zitek wrote in a recent issue of the LIVMA News  “[Dr. Wadyal] follows in the footsteps of other Long Island veterinarians who have served not only Long Island but New York State as well.

Dr. Surinder Wadyal, came to the United States from India in 1973 and soon
steps up to the highest office of the New York State Veterinary Medical Society,
This a testimony to those who enter this country with the intention of joining in its growth and well-being as participating citizens.

The first and most important obligation of a veterinarian is to his/her patients. This primary obligation is to those he serves and not himself. Over 30 years serving his clients and their patients Dr. Wadyal has proven this.

One’s obligation is also to their community—to reach out and participate in the life and well-being of the community.

Dr. Wadyal has shown his concern for those in his community by being a long standing and active member of the Oyster Bay Rotary Club, an organization built upon the idea of “Service Above Self,” serving, at first, at many rabies clinics, and then becoming the LIVMA Rabies Clinic Chair, and joining with other veterinarians in treating the dogs which assisted in the recovery of victims
at the 2011 attack on the World Trade Center.

Dr. Wadyal follows a precedent in serving the veterinary community on Long Island and New York State. Having served as President of the LIVMA, after being a member of the Executive Board and serving on many committees, he represented the LIVMA on the New York State Veterinary Medical Society’s Executive board. 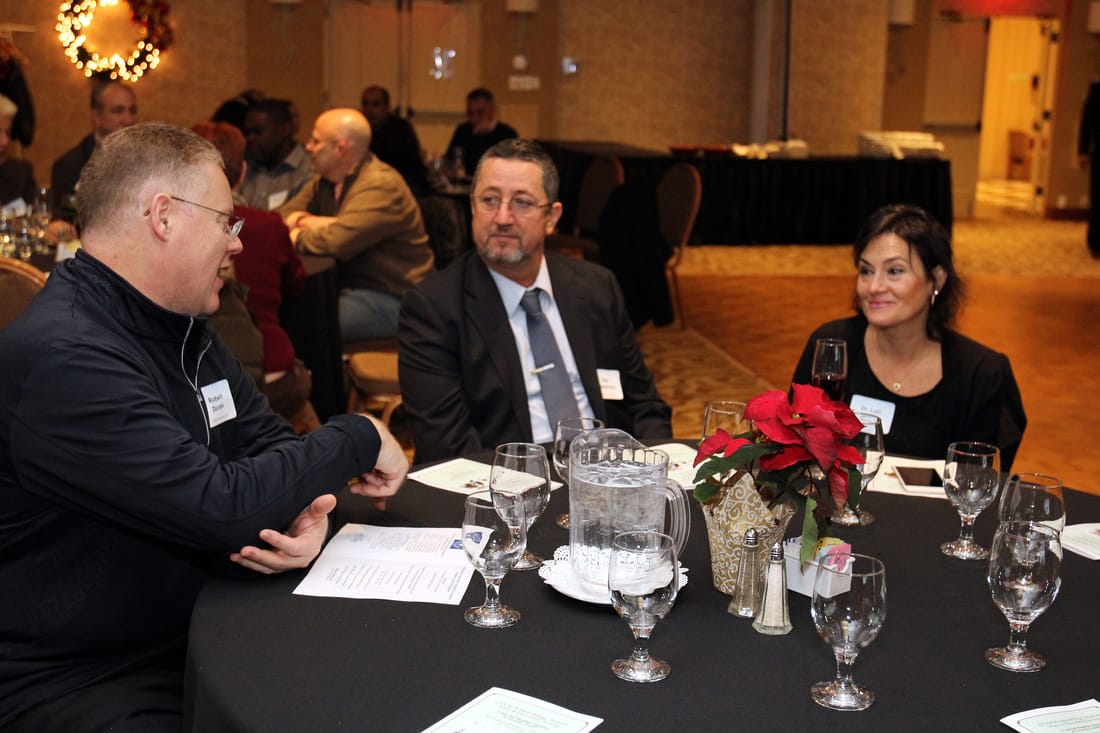 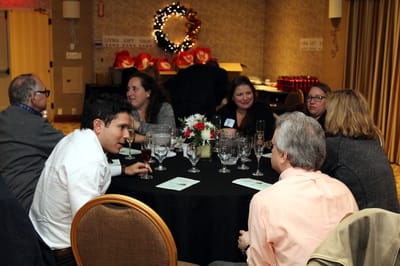 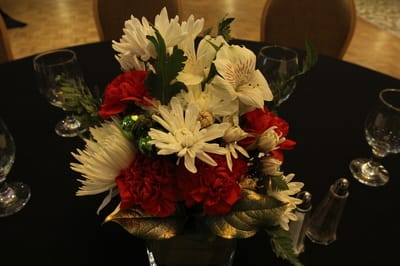 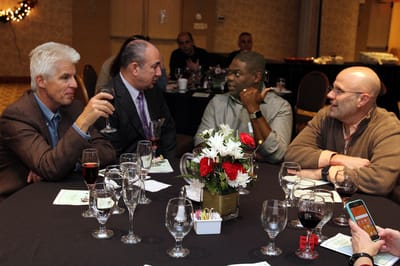